Paul Jenkins (1923-2012) was one of those rare artists whose work, over the course of six decades, continuously focused on color and movement in new ways. In 2009, His exquisite color-drenched abstractions were the subject of an exhibition, Paul Jenkins: Space, Color, and Light, The 1960s and 1970s, at D. Wigmore Fine Art, Inc. To ensure that Jenkins’s paintings were in the best possible condition for the show, gallery owner Deedee Wigmore called upon Lowy. Over the years, our team had the honor of working with Jenkins himself and conserving a number of his works, including for a previous exhibition of his paintings from the 1950s, which was also organized by Wigmore.

“Lowy did such an excellent job on Paul’s 1950s paintings,” said Wigmore. She explained that Jenkins didn’t “want his works to look radically cleaned, and Lowy knew exactly how to interpret them. It was hard to tell the difference between the examples that Lowy conserved and those that had not been touched. So, of course, we are delighted to be working with them again.” Wigmore noted her aim with the 2009 exhibition was to continue presenting an historical chronology of Jenkins’s art while highlighting its “ravishing beauty.”

Jenkins rose to fame in the 1950s with his luminous, large-scale abstract paintings incorporating veils of rich color. His process of pouring paint directly onto the canvas, which he manipulated to achieve a desired effect, is a hallmark of his work. The technical virtuosity, expressiveness and transcendental quality of his art represent the innovative spirit of American Abstract Expressionism. Yet Jenkins cannot be confined to an historical time frame, for his art occupies a dimension of its own, expressing an ambiguity that invites multiple interpretations. Jenkins distills the essence of his paintings in dynamic, controlled improvisations of light, form and color, guided by his intuition and mystical leanings.

“One of the essential elements in painting to me is light,” Jenkins said of his art. “The light that is seen from underneath, for example, must be within the form and work with the structure to be significant. To paint is to affirm an irrefutable presence, and I don’t mean this in the figurative sense. That which happens is independent and creates its own history. I enter a state of being with the paint, a language unfolds—a dialogue with the paint and the intention made manifest.”

Born in Kansas City, Missouri, in 1923, Jenkins studied with Yasuo Kuniyoshi at the Art Students League in New York from 1948 to 1952, when he met Abstract Expressionists Mark Rothko, Barnett Newman, and Jackson Pollock, whom Jenkins credited as having a significant impact on his life and work. In 1953, he settled in Paris, where he began to experiment with poured paints on canvas and paper, finding inspiration in the luminous pastels of Odilon Redon and the imbued color of Gustave Moreau’s works.

Throughout the 1950’s, Jenkins became a significant figure on the Paris and New York art scenes,coming to know artists such as Jean Paul Jenkins: Phenomena Leaf Torn Dubuffet, Mark Tobey, Willem de Kooning, and Robert Motherwell. In the following decades, he mastered a variety of media, including watercolors, prints, sculpture, and sets for film and theater, while exhibiting his work at galleries and museums worldwide.

Up until his death at 89 in 2012, Jenkins continued to paint every day and exhibit widely. His works grace the permanent collections of many major museums, including the Centre Georges Pompidou in Paris, the Tate Gallery in London, The Museum of Modern Art in New York, and the Smithsonian American Art Museum, the National Gallery of Art, and the Hirshhorn Museum and Sculpture Garden in Washington, D.C. Jenkins’s paintings from the 1960s and ‘1970s, which are executed in acrylic, are among the finest of his career, according to Wigmore. Many of the 21 paintings in the 2009 exhibition were in Jenkins’s private collection and had not been shown beforehand.“Artists were engaged in a lot of technical experimentation in the 1960s and ‘70s, when acrylics became a new medium,” Wigmore said. “In these works, Paul created a complex dialogue between colors, shapes, and the white gessoed background, while retaining the juicy, rich, liquid color for which he is known. His technical and painterly skills are amazing, and people are drawn to the sheer beauty of his work. He was truly a living legend.”

Regarding the evolution of his materials, Jenkins said: “In the 1950s, I worked in oil with a certain kind of enamel that I was able to acquire in Paris and which is no longer made. I made the oil paint fluid with various mediums, and each variant created a specific result which I was able to observe and integrate into the painting. From about 1960, I started to work in acrylic, which gave me opacity and translucency at the same time. I have always varnished both my oil and acrylic paintings, because I feel the surface should be protected. And I have always worked on primed canvas, because I do not want the paint to be absorbed into the canvas in a saturated way.”

Because Jenkins worked in the innovative and evolving medium of acrylic during the1960s and ‘1970s, each of these paintings has its own individual character, thus requiring unique, individualized conservation treatments. Jenkins himself worked closely with Lowy’s conservators to preserve the visual aspect he wanted. Fortunately, his paintings were already in good shape when they came to Lowy, having been wrapped and stored well. They primarily needed cleaning, to remove a thin layer of accumulated dirt, and revarnishing. Some of the canvases also had acquired stretcher bar marks and other minor surface changes over the years. These works were treated with heat and humidity on a vacuum table and in some cases, the versos of the paintings were infused with the thermoplastic adhesive Beva 371, to preserve the original canvas, mitigate and consolidate the distortions.

The major challenge, however, came with cleaning. “Not only were the paintings large and, therefore, difficult to maneuver, each one also had its own specific reaction to the cleaning solvents and detergents,” says Bill Santel, Lowy’s head conservator. Because acrylic paints are more soluble than oil paints, Lowy’s team had to adjust the solvents and detergents accordingly, depending upon the solubility level of the paint mixture and the type of gesso and glazes used by the artist. “When it was not possible to use a solvent, we cleaned with an aqueous detergent, which we applied only to specific areas of the canvas,” says Bill. “It was a time-consuming process, but it was worth the wait. It was exciting to be able to work with Paul and recapture the original vibrancy of his art.”

Jenkins was decidedly pleased with the results. “A painting has an inherent stability, whether or not it is in need of a cleaning or other serious care,” he said. “It is this constant that is of primary importance, because the painting must always remain its intrinsic self. After a painting has been cleaned, it should not look as if it had undergone a cleaning. The artist’s concern is that in the restorer’s hands the work will lose its essence. I have seen Lowy meet the challenge of this difficult terrain.”

Wigmore, too, commended Lowy on a job well done, just in time for the 2009 exhibition. “We’re thrilled that Lowy’s conservators were able to reveal Paul’s genius more fully,” she said. “Larry Shar invests in the training of his staff, and they stay at Lowy long enough to grow and mature in their craft. As a result, they produce work that is consistently high quality. I can always count on Lowy getting everything just right!” 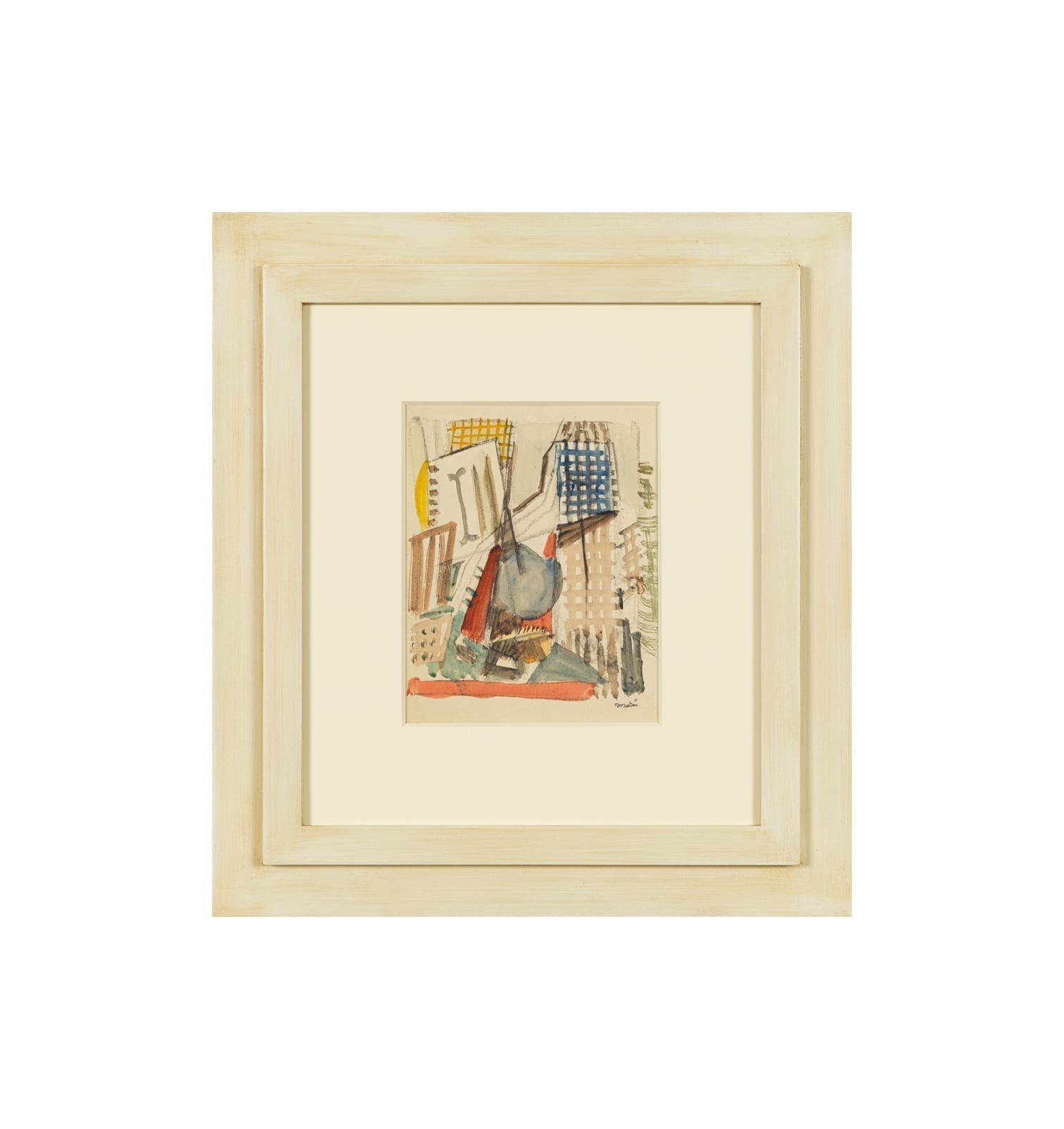