“Rosie the Riveter” was an iconic symbol of working women during World War II and she has since resurfaced as a representation of American feminism. Featured on patriotic posters during the war used to recruit woman to take over jobs previously done by men, she was first famous as a character in a popular song who worked in a bomber factory driving rivets. To this day, she is the most iconic image of patriotic working women in the 1940’s. Hillary Clinton used the image on a campaign button in her 2016 presidential campaign and “Rosie” can still be seen reproduced on many consumer goods representing female empowerment.

Norman Rockwell created his version of “Rosie” for a Saturday Evening Post cover in May of 1943. “Rosie” was painted in the same position that Michelangelo used for the prophet Isaiah on the ceiling of the Sistine Chapel. Instead of the book of Isaiah, she holds a rivet gun and her foot rests on a copy of Hitler’s manifesto, Mein Kampf. The cover gave “Rosie the Riveter” instant fame as a symbol of the millions of women who joined the workforce when the men went to fight in World War II.

The frame that Lowy created for the painting is a gilded cove frame in the American Federal style with patriotic stars ornamenting the corners of the cove. The Federal style is an early 19th century revival of classical Greek and Roman styles. Simpler than European neoclassical frames, the American Federal frame was frequently a simple symmetrical gilded cove adorned with a continuous twisted rope, beads, or lambs tongue ornament. Commissioned portrait frames would sometimes have additional motifs related to the sitter; these motifs were often patriotic symbols, such as eagles or stars. Trophy frames were also historically made for royal or military portraits; these frames were created for
visual impact and intended to elevate the sitter with dazzling gilded finishes and grand ornamentation.

The concave shape of the “Rosie” frame, called a cove or scotia, is a neoclassical design that can possibly be traced to the profile of the base of a
classical Doric column. The cove frame brightly finished in gold leaf was especially popular for 19th century American frames and appreciated for its ability to reflect light back onto the painting. This 20th century version that Lowy created was made using a flatter, more modern cove and it was adorned with gilded ‘rivets’ forming corners and centers around the top outer edges. Gold leaf has been used for gilding frames since the 15th century to give objects more importance and beauty; the gilding of this frame elevates and immortalizes Rockwell’s painting of “Rosie the Riveter” treating it as if it were a painting of Michelangelo’s Isaiah. 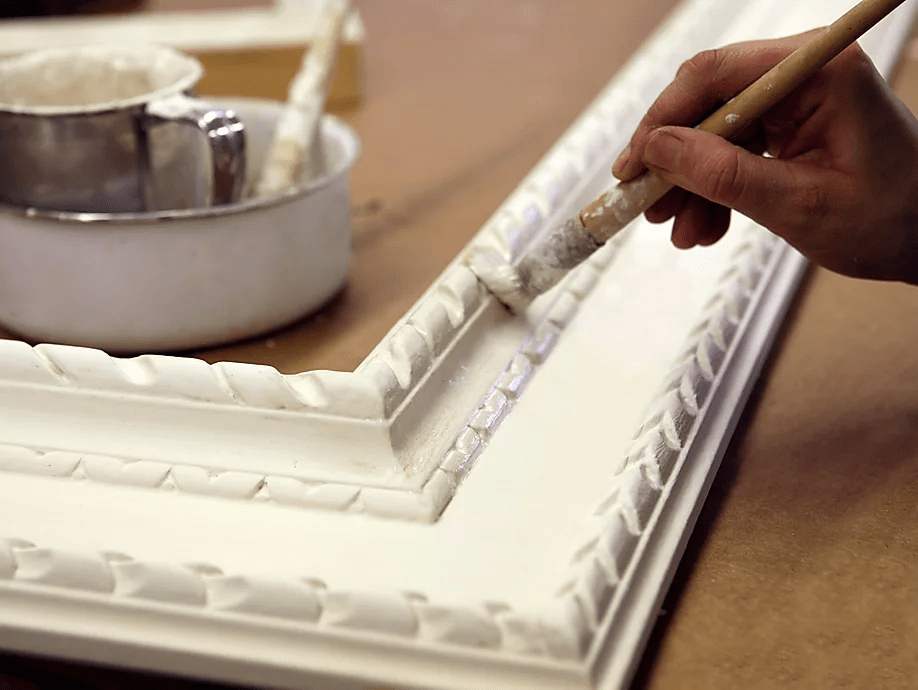 What is Gesso, and How Are Gessoed Gilded Objects Cared For?