A Tale of Two Treasures

At Lowy, sometimes a frame isn’t just a frame. Recently, client Geoffrey Paul presented the Lowy team with an intriguing challenge. He asked them to find an innovative, complimentary way to display two prized additions to his extensive collection of maritime artifacts — an historic, 19 th century Proclamation and an engraved gold snuff box. The Lowy solution demonstrates that there are creative, even ingenious, ways to showcase a collector’s passion, in this case, a passion that began when Paul was a boy growing up in Essex, Connecticut, in the 1980s.
Essex has a long and colorful history of sending men and boys off to sea. In the 19th century, hundreds of sea captains hailed from this scenic port on the Connecticut River. Stories of their adventures and accomplishments (these intrepid captains and their transport ships played an important role in building America’s economy and expanding its immigrant population) ignited Paul’s imagination and inspired him to collect maritime artifacts of all shapes and sizes.
His largest acquisition was a house that was built by Captain Henry Champlin, the co-founder of the first line of ships to offer regularly-scheduled service between New York and London. Today, the beautifully restored Champlin house is home to Paul’s collection, which includes, among other artifacts, the Captain’s chronometer, pocket watch, and a portrait of Mrs. Champlin by the French court painter, Louis Ducis. It is not unusual for Paul to track an object for years before it becomes available for sale, and he readily admits that the thrill of the chase — the research and serendipitous developments that lead to these finds – is as enjoyable and exciting as the act of acquiring them.
Paul discovered that Captain Champlin’s neighbor in Essex was his sea-faring brother-in- law, Captain Henry Hovey. Famous for his bravery and dedication, Hovey lived up to his reputation on November 28, 1850, when he came upon a steamer, the Helena Sloman, in distress, down to its last rudder and sinking rapidly mid-ocean. Hovey rallied his crew on the Devonshire to rush their boats into the churning water to save 180 passengers and the crew of the Helena Slonam. To commemorate the dramatic rescue, the City of New York presented Hovey with a Proclamation and an inscribed gold snuff box.
Hovey died in 1871, but his memory and his mementos live on in Geoffrey Paul’s maritime collection. When Paul brought the artifacts to Lowy, he had two goals. He wanted to display the framed Proclamation and the gold box together (alongside a beautiful portrait of the Devonshire) to maintain their connection. The box had to be framed in some way so it could hang alongside the Proclamation, but Paul did not want it sealed and inaccessible under a layer of glass. “History is tactile,” he suggests. It was important to him to be able to remove the snuff box from its display and hold it in his hand from time to time, to actually feel the connection to Captain Hovey and his storied past.
Lowy’s first step was to restore the Proclamation’s original frame, which was from the late 19 th century Victorian period. The team brought the frame back to life by reconstructing missing ornamentation, including a fancy top, casting replacement parts, sculpting the top out of epoxy putty, and then gilding the replacements to match the original patina. 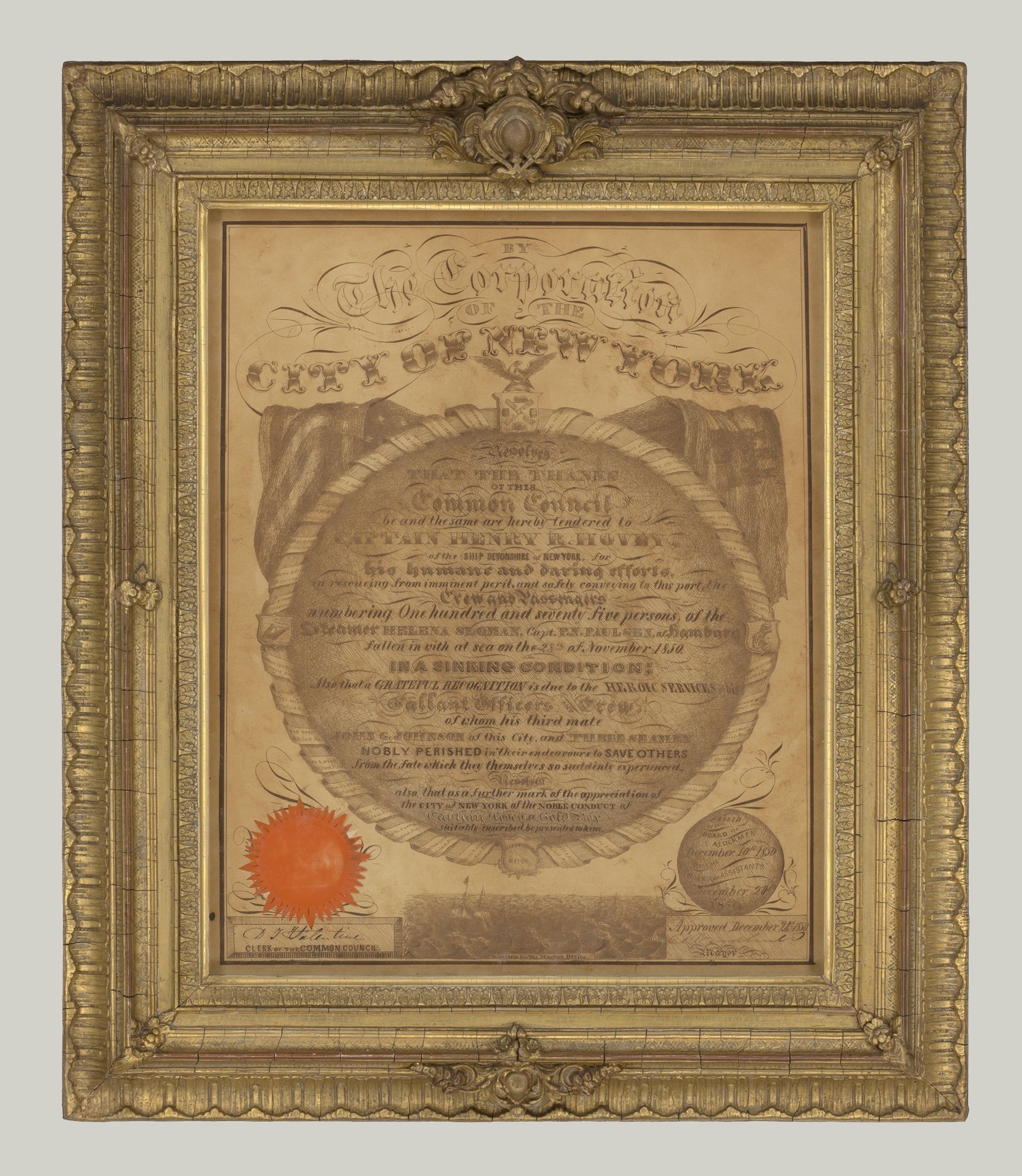 Creating an appropriate display for the snuff box proved to be a more complicated undertaking. Lowy began by designing a box frame with a velvet interior. The next step was to front the box with a decorative frame hinged like a door, using thin magnets instead of unsightly hardware. Since the finished piece would be hanging, there were practical concerns. As Larry Shar explains, “The challenge was to have the snuff box sit snuggly in its velvet backing so that it would not fall out of its niche when the door opened, yet, it had to be easy for Paul to remove.”
In determining the style of the frame for the hanging display, “Paul was more interested in having the two frames match aesthetically rather than historically,” notes Shar, “hence the choice of an earlier 19th century American gilt composition frame for the box, which complements the aesthetic sensibility of the Proclamation and allows the two pieces to hang harmoniously.” 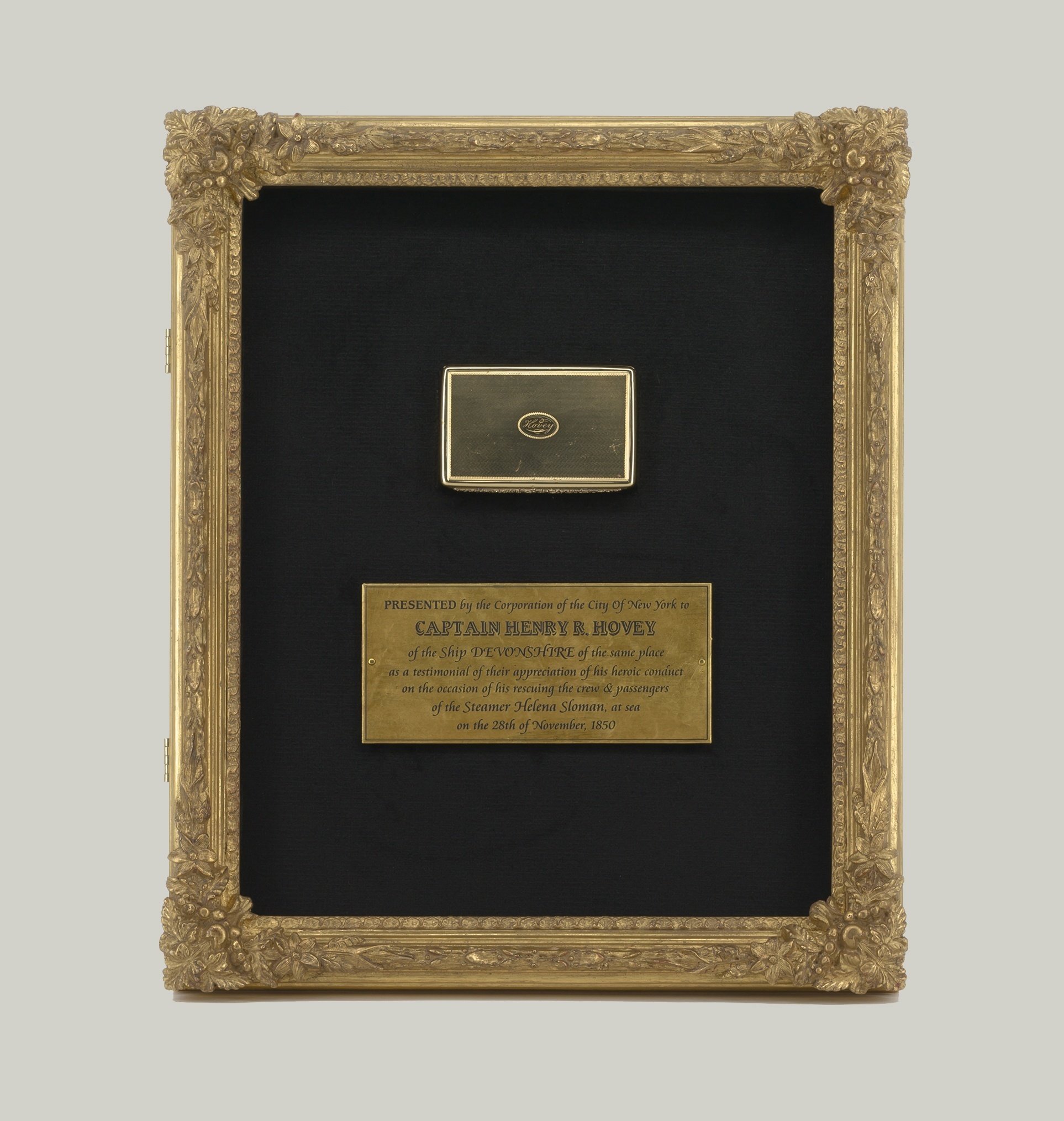 The glass on the box frame serves two purposes. “In addition to keeping the snuff box, nameplate, and velvet clean and free of dust, it also makes the whole presentation more gem-like and theatrical, says Shar. The magnificent, on-the-wall pairing of Captain Hovey’s treasured gold snuff box and Proclamation shows that it is possible to display a prized collection in a manner that both preserves and celebrates history. Lowy welcomes the challenge of displaying your collection – your passion — in the best possible way.